So the other day I did something that, apparently, a few people didnt think I would do, or like to do, or be interested in or whatever.

I went on my first kayak trip.

Over the years me buying a kayak has sort of become and inside joke and way to tease me. Like I said before I dont think many people thought I was serious about doing it or would be into it. But now I own one and I have officially went on one more kayak trip than most of the people reading this blog post.

As you can see by clicking on the map on the left, I took a trip down the Miami-Erie Canal in my hometown of St. Marys. I used the My Tracks app on my Droid

to record this trip. Unfortunately I only recorded the one way, so just double the map's distance and path. I took off from the red point, went to the green and back to the red.

It was a very nice and relaxing time. I saw a lot of interesting things on the canal including wood peckers, some wild rocket lilies (well semi-wild) and a couple of small fish jumping out of the very shallow water.

The canal water was about 1.5 feet deep with a very thick mud at the bottom that is unlike most mud you would encounter. It's thick and black and wont let you go if you get into it. So I definitely took it easy in the kayak and did my best to not tip it over.

I'm using a Pelican Break (80) that I bought from a nice lady south of here thru Craigslist. The kayak seemed to track well and was very stable even has I bobbed it from side-to-side in some more interesting moments. 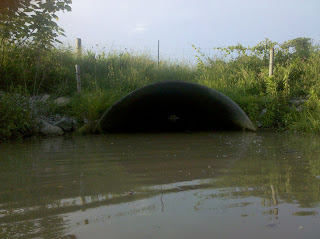 Now what sort of trouble could I get into on a long since used waterway? Well I'm glad you asked. At the green marker on the map is a tunnel that leads underneath State Route 33.

The interesting thing about this tunnel is that it's very similar to a pedestrian tunnel that is on the towpath along the left side of the canal. A tunnel that I've ridden thru on my bike or walked thru several times in the past. So I thought, "What the heck? I can fit and I can see the other end, so let's try it."

The bow of the kayak is in, it's an 8 foot kayak so this isnt going to be very dramatic. A few more light paddle strokes and I'm in. It's dark, the noise is strange from the traffic above. The light reflections bouncing around on the sides are interesting and my paddles make a weird ding off the metal sides when I accidentally bump them.

Then I hit my first spider web. Face first. No big deal. I'm not afraid of a little spider ... or a medium sized spider. Heck even large spiders dont bother me, so I press on. Oh look, there's one of my spider friends right now hanging from the next cobweb. I'm about 12 feet in, roughly under the first lane of traffic, and am now face-to-face with... 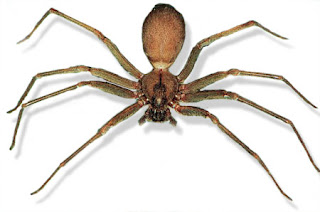 Yep. Dun, dun, duuuuuuuuuuuuuuuun. The brown recluse. Not incredibly poisonous, but has been known to bite and cause some damage. I pass him slowly. He doesnt seem to know what to make of this person on a big piece of orange plastic invading his pristine home.

had let me pass safely. And then I looked up. In the corrugated bends of the steel pipe I am in hangs the reason that I left the tunnel. Well the several reasons. 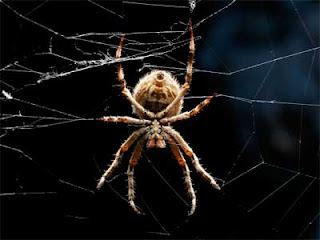 I present, to the uninitiated, the Orb Spider. This guy doesnt pack the potential problems as the Brown Recluse that I passed earlier, but they are much nastier looking. The abdomen was at least the size of the end of my thumb. Oh and notice how I am using plural pronouns? Yep, you guessed it, there were a LOT of them. I counted at least 15 directly above my head as I spun my kayak around ... there's 3 more ... weird splashing noises start echoing thru here as I hustle myself out of this womb of web weavers.

So I turned around and began heading home. Back the way I came. The canal had one last surprise in store for me though. A good sized snapping turtle leaped from the water, glanced off my back, hit the kayak's stern and slid into the water. Yeah, I think I was attacked by a turtle.

So all-in-all, a nice little trip. No rapids, a casual paddle down calm waters and a few close calls with some local Ohio wildlife. It was fun. I'm hoping to go out tomorrow to another section of the canal south of town. This part goes under State Route 66, a railroad another road and out to the feeder from the lake. I'm hoping this one will have less spiders.