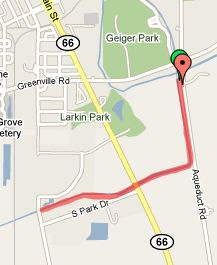 Kayak trip numero deuce is under my belt.

I now have 4.3 miles under my belt on it so far all thru paddle power

As you can see by the map (click the image to the left) that I inserted at the aqueduct in Saint Marys. This device is a series of tubes and waterfalls that carries the water of the canal over top of the Saint Marys river

, as well as provides the river with overflow water from the canal. When properly functioning it helps maintain the canal at a normal level even during very very heavy rains.

The insert depth was roughly 2 to 2.5 feet with the same basic layout as my previous trip. Heavy decaying-organic mud

on the bottom, shallow murky water, several fallen limbs and of various sizes.

On this trip I saw two things that I didnt see on my previous trip and it really is amazing just how different living things can can exist less than a mile from each other. However I'm sure it's easier now with humans creating artificial boundaries all over.

The first animal of note was a wood duck

. This little critter comes to our area to nest and raise a family. So I saw 1 male and 2 or 3 females and several ducklings.

It was funny, as I would move down the canal, the mother would hustle the ducklings down the canal further on and they would scamper across the water surface trying to fly

I tried to stay a safe distance back because I didnt want to stress them too much, and I've seen ducks attack swimming dogs before and didnt want to repeat that behavior. Two ducklings got separated and hid along the shore. When I passed they came out and squawked and announced their displeasure with me now being between them and their mother. All along the canal in this area the edges were much too steep and tall for the ducks to scale. Their mother didnt seem too happy with our new positions either and she didnt seem to want to adopt me. I made it to 66a, my goal was on past a few hundred feet away, so I decided to just turn around and not stress them anymore.

Things I learned from this trip:


Oh and one last thing, there were some awesome purple wild flowers growing on several bushes down there.
They were more towards the spot I turned around at, so I picked one. Just like in the Batman movie, I had a quest that resulted in me picking a flower. So I think I am just that much closer to being a super hero. 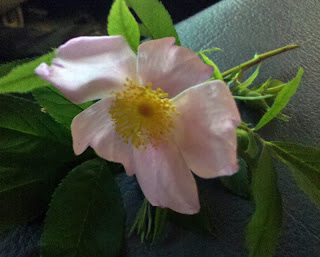