"Dude, have you ever been mocked by a turd? It's not awesome."

Anyone else listen to Prince? I listen to quiet a bit of his songs - including Batdance.

At any rate, I'm trying to determine an approximate speed of the "Little Red Corvette"(a metaphor of a speeding car to a fast woman but let's ignore that).

Things we can extrapolate from the song:
It is my assumption that by the time that Prince warns her the first time that she is going too fast that she has easily maxed out the Corvette at 125mph. The album was recorded in Minnesota where this is double the current posted speed limits. Slow down indeed.
5 comments:

Please let this be real.

Ok so I know I havent posted a lot on here lately. Stupid Twitter and Facebook are sucking up all my quick post anecdotes lately and I havent had many deep insights worth posting on here.

Dont know if that's a good or bad thing. So here's a list things I've recently been thinking about: 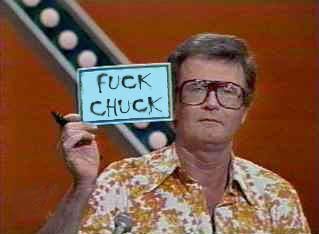 This is great. Especially now that Chuck Norris has thrown his opinion into the whole Obama-birther crowd.
19 comments:

Sookie (aka my house) is MINE!

My loan cleared it's last hurdle for my house. Now the title department sets a closing date and I am officially a home owner!
2 comments: