Quote of the Day

I hope that when I die, people say about me, 'Boy, that guy sure owed me a lot of money.'

Case in point is Wes Moss, in the latest Zune advertisement. Sure the ad makes tons of sense and is a great selling point over the iPod/iTunes system but it's just not sexy ... or is it? Have you ever clicked on the ad and actually seen the FULL SIZE advertisement? Go ahead, click on it over there and and try it out. ;)
7 comments:

What the hell is going on in the world?

Been busy today so I've only been glancing at headlines flying by.

Correct me if I'm wrong but did the Gov. of South Carolina fly to Argentina after kidnapping some little girl and while down there give Steve Jobs a liver transplant all because there have been riots in Tehran?

Wait it seems like he went to Argentina to cry over the fact he's been cheating on his wife for like five years. And in the last 5 months he's been "in overdrive in figuring out how to get this right and to be honest". Wow. What a fuckwit. You stop by not putting your penis or emotional penis in another woman who isnt your wife. And being honest is a pretty clear and easy thing to be.

Still not clear on how Steve Job's liver fits into all this stuff ... oh and is his new one an iLiver? Wait, is that part of iSurgery or do you have to buy an upgrade? I dont own a Mac so I'm not sure how all that works.
1 comment:

I am starting a new blog. Permanent Loop (www.permanentloop.com).

So go check it out and "follow" it if you have a Blog of your own, etc.
1 comment:

I, for one, welcome our new touch overlords.

See you in hell!

On today's The 700 Club, Pat Robertson was asked what to do if your son tells you he's gay:

Robertson "I am not at all persuaded that so-called homosexuals are homosexuals because of biological problems. There may be a very few, but there are so many that have been made homosexuals because of a coach or a guidance counselor or some other male figure who has abused them and they think there's something wrong with their sexuality." ... "Well, I think you ought to tell him, 'Listen, son, you know, here's what the Bible says about this, and it's called an abomination before God, so I've got to tell you the truth because I love you'...I mean, if somebody's on their way to hell, they'll -- I mean, you've got to love them to rescue them." 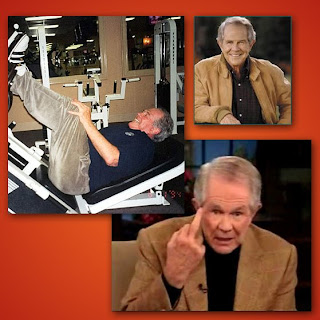 I do know what the Bible says now about homosexuality, but the word abomination was added and not in the oldest texts of the book that we have access to. There's also a school of thought that "abomination" isnt the same as a Hell-damning sin by people much more learned and theologically versed then Pat Robertson. But let's assume he is right and the literal direct meaning is that homosexuality is an abomination as it's written in Leviticus 18:22.

Well then Pat Robertson is also going to hell, well that's probably not a shock to anyone. But the specific reasons shown in the above images (and no not just for his fashion sense).

Leviticus 19:19 Ye shall keep my statutes. Thou shalt not let thy cattle gender with a diverse kind: thou shalt not sow thy field with mingled seed: neither shall a garment mingled of linen and woolen come upon thee.

So he's definitely wearing different fibers in the pictures above, including leather shoes which leather is a BIG no-no. And I'm sure he's eaten shellfish before and all kinds of crazy stuff.

Now enjoy one of the best moments from one of the greatest shows ever, The West Wing:

I just got done watching a rather disturbing video on Youtube that I dont wish to dignify with a description here. However to make up for that evil, I give you this:

Gimme all your money, all your hugs and kisses too ...

I think I set a new personal record for money spending in a single day.

Yesterday I paid a contractor (doing insulation and HVAC work on my house) $2400 and then opened my mail and got a bill from the anesthesiologist for $676.

Thankfully I've met my $1000 insurance deductible, so if my head falls off I'm good with that at least. Still got some money held back for final costs with my mortgage if that thing ever goes thru. Man it takes a long time to buy a house.
1 comment: