Starting today all Ohio voters can begin voting for the General Election. And if you arent registered you have until the 6th to register. So you can go to your local Board of Elections and vote early or register and vote all in one stop. No excuses.

And yes "Ohio" includes you too Buehler.
13 comments:

This blows out any claims of sexism by the McCain Campaign when people talk about or try to ask questions about Gov. Sarah Palin.

Think it's just a redirect to the site from someone else? Well you'd be wrong the McCain Campaign owns the domain and is apparently using it.
8 comments:

I was recently interviewed for an article for the Cleveland Plain Dealer. If anyone is interested in checking it out.

It's a good piece, that talks about the strategy and effort going into the campaigns here in Ohio.
No comments:

If you want to watch the debates tonight on the big screen at the HQ, let me know. We're also doing some phone banking prior to it.

Other than that, this is an open thread, chat away ...
11 comments:

I'm working furiously for the campaign we had (and are having) several events this week.

If you're interested in watching the first debate on a REALLY big screen, let me know and I can hook you up.

I have a friend named Joel. He's a regular on my blog comments. I've known him for years. Him and I love to argue and debate. I love that about him.

I love that he and I can disagree totally and still go back and forth and be the better for it. I cant actually think of a single time that one of us have convinced the other to change our position on something, but personally I've always felt the better and smarter after one of our "debates". Joel's a smart guy and I respect that.

Joel has an enormous faith in his savior Jesus Christ. And while I dont share his faith, I think his faith has been a positive influence on my life. He has shown me that you can be strong in faith in an intangible force and be the better for it and not squander it or use it to control someone else.

I have a friend named Joel and I am very thankful that I do.
13 comments:

Rant, it's like "ant" but with a big fucking R in front.

It's been awhile, but it's back - the rant post! I guess I've been at peace with a lot of things in my life and havent felt the need to in awhile.

We live in such a fake ass world that people feel the need to specify what is "real". Oh how I wish we lived in a world that was the opposite and everything was just assumed to be real and you had to label if it was "fake". I was in line at Taco Bell and they have those new Fruitista things and the sign said "Topped with REAL Strawberries". *blink* Wow. People we are in a recession and the lowly fake strawberry farmer has it hard enough already without you helping to put him out of business by buying all these REAL strawberries.

I hate the net lingo response "kk". Ugh it's such a waste. I'll just assume you agree if you dont tell me otherwise. I dont need you to divert my attention back to your message window to read your damn "kk's". I hate it even more when i accidentally use it.

Do yourself a favor, find one and enjoy it and memorize it.

4) People who claim they never pick their nose

What-the-fuck-ever. You know you have. Hell you might be doing it right now. It's your nose and your finger and as long as you're not wiping it on me or stuff I own, man, go balls out.

5) People who dont understand the width of their own car

I hate when people veer left of center because they cant judge how close a parked car is to the right of them. I'm not talking a little bit of lateral motion but a HUGE weave into oncoming traffic. Sure some streets are so narrow that with parked cars they turn into a one lane road, but most streets can accommodate four cars abreast and you should figure out that you can squeeze thru there and if you cant judge that distance than sell your car and buy a bike.

6) People who are rude on the phone, but polite face-to-face

You know what jerky? I know where you live - I can come to your house. I hate people who think they can say whatever they want on the phone to you that they would never in a million years say to your face. Stop hiding behind the absurd fact that a phone call is interrupting your private time and a knock on the door isnt and then that somehow leads you to behave in any rude or childish manner you choose.

Go to McDonalds and order a "regular size" Coke and watch the person's brain explode as they try to figure out what size that is. Maybe I'm just getting old now, but does anyone else remember when a "regular" size was a medium?
7 comments:

A look at McCain Ads

And the final reason I will never buy an iPod

And they havent given him a dime except to pay him for his time that he went and spoke at their trial for the patent lawsuit.

Someone spray painted this addition to our Obama office in Wapakoneta, Ohio. We called the police, the officer came and took a picture and said "There's your picture." and said they'd make a note of it and then just left and apparently acted like he was put-out and not interested at all.
8 comments:

Here are some pics from the area. The barn is yet another barn getting painted with the Obama logo and the others are shots of the painting I've done at the headquarters in Wapakoneta.
2 comments:

Here are the pictures I took at the Obama rally in Dublin, Ohio. Wow was it awesome. Senator Brown was there, Senator Glenn, Gov. Strickland, Senator Biden and Senator Obama all spoke.

There were about 20,000 people there to hear these great men and women speak.
No comments:

Now if they could just help President Bush too, maybe some flash cards.

*I tried to embedded the video but CNN sucks at that and it didnt work.
7 comments:

I want to kiss his face and pat his head.
11 comments:

I dont really have the energy to comment on Gov. Palin's speech right now. I cant really think of anything that I agree with or liked ... what are all your thoughts?
14 comments:

Okay, it was one thing when the one guy on Fox News said this exact same line, but now Cindy McCain repeats it? While talking to my friend (and yours probably) Wulf, he made a good point, "Obama has some then also. Illinois is close to Canada."

And continuing that chain of thought - Bush lived in Texas, near Mexico (which actually has attacked the US several times thru our history) and we see what kind of super policy experience and judgment he's had. :P
13 comments:

And here you just thought volcanos could do it. 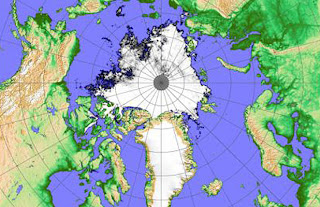 Ta-da! A brand new island has formed. This is a first during the entire span of human history. Yep the Artic Sea Ice has officially detached from both sides and the northeast and northwest passages are fully opened. Thank god this has absolutely nothing to do with man made driven climate change according to Republican VP Nominee Gov. Sarah Palin. Wow - that's a load off, I was really worried that we were fucking stuff up.
7 comments: