Are you kidding me? Are you absolutely kidding me? This is who he picked? Wow. I am seriously shocked and flabbergasted. Yes faithful readers, my flabber has been officially gasted.

How can you try to make the case that Senator Barack Obama doesnt have enough experience and then pick Governor Sarah Palin? She's been on city council, then was mayor and now is on her first term as Governor of Alaska. I gotta tell you there's a serious doubt if McCain is healthy enough to undertake this job (which I honestly hope is not the case for several reasons) and if he's not then you have President Palin who has less experience than Senator Obama.

Senator McCain is trailing Barack by almost 4 points in Alaska, but if she makes up that margin for him - Alaska only has 3 Electoral Votes.

She is no Hillary Clinton. If he was going for the women's vote and trying to snarf votes from bitter Hillary supporters this does not do it for you, not by a long shot.

I am going to give her the benefit of the doubt that she was a good pick for this, but for right now I cant see it and I think John McCain and the Republicans will have a very tough time with explaining who she is, and why she's the best pick - especially to their base.

Wow! That speech was absolutely amazing!

This has been a long week - and I thought fair week was long. Well hopefully I'll get some time to rest and be at home longer than 10 minutes and not fall asleep.

Barack Obama really brought it last night and wow. Just wow. I'm so proud to have him as my candidate and I'm proud to be busting my ass for his campaign.

What did everyone else think of the speech?
6 comments:

From JohnMcCain.com via Boing Boing:

"It may be typical of the pro-Obama Dungeons & Dragons crowd to disparage a fellow countryman's memory of war from the comfort of mom's basement, but most Americans have the humility and gratitude to respect and learn from the memories of men who suffered on behalf of others."

But he almost immediately apologized over at Politico:

"If my comments caused any harm or hurt to the hard working Americans who play Dungeons & Dragons, I apologize. This campaign is committed to increasing the strength, constitution, dexterity, intelligence, wisdom, and charisma scores of every American."

Click on this image and look at it full sized and tell me you'd buy anything from a man with this expression.
2 comments:

I'm at the convention training program 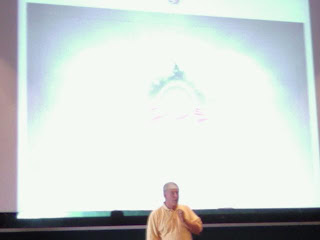 This place is jam packed. there are over 900 people here getting trained and going over strategy to get Barack Obama elected with Ohio's help. Governor Strickland just spoke and it was awesome.
3 comments:

haha ... I cant believe this is the first time I've seen this. Very funny.
5 comments:

The things I do for votes... 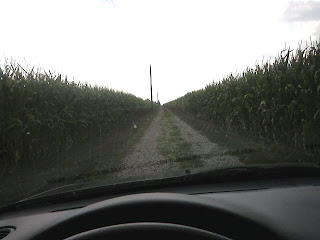 During phone banking we found a man who didnt know if he was registered to vote and didnt know where to vote. So I printed off some info for him and printed him a form to mail in to register to vote and one to request an absentee ballot. It turns out he was an older guy and a little confused about the whole process. This was his driveway. When I took this picture I was about 1/4 of the way down it. His house is behind me and way way way up ahead is the road.
11 comments:

On the topic of McCain

Oh man. "In the 21st century, nations dont invade other nations." He voted to authorize us to do that same thing in Iraq 5 years ago.

And even more fun:

McCain's top foreign policy adviser, Randy Scheunemann, was until March a registered lobbyist for the Republic of Georgia. His firm continues to work on behalf of Georgia and other countries in the region. In 2006, lobbyist Scheunemann accompanied McCain on a trip to Georgia.

And I'm not even going to mention his remarks on the Republic of Georgia being lifted almost verbatim from Wikipedia ... oh wait, I just did. Oh well, it's my blog.
9 comments:

I hope this means Rick Astley is on the short list for VP.
4 comments:

ARCHES NATIONAL PARK, Utah - One of the largest and most photographed stone arches in Arches National Park has collapsed.

Wall Arch fell sometime early last week, though no one has reported seeing it collapse, said Paul Henderson, the park's chief of interpretation.

He said the arch, located along the popular Devils Garden Trail, was claimed by forces that will eventually destroy other arches in the park: gravity and erosion.

Rumors of the bridge collapsing after several midgets and an old man in a robe attempting to cross it while being chased cannot be confirmed at this time.

When I first looked at that headline, I thought it said "U.S., others urge Russia to accept juice".

Two incredibly different stories if you change that one word.
2 comments:

Guess What I'm Talking About

Now use your good commenting ability to figure out what this relates to.

Labels: Guess What I'm Talking About

Rich Cordray & I at the fair 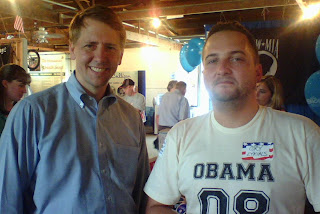 Had a great time working the Democrats booth at the Auglaize County Fair. While I was there yesterday I met with Rich Cordray. He's the Treaurer of Ohio and is running for Attorney General this year. He's done some great work. Check him out @ www.richcordray.com
21 comments: