I'm in my own home stealing your child's innocence

When gamers found a hidden sex scene in “Grand Theft Auto: San Andreas,” politicians fell all over themselves condemning it, including Sen. Hillary Clinton.

“The disturbing material in ‘Grand Theft Auto’ and other games like it is stealing the innocence of our children and it’s making the difficult job of being a parent even harder,” she said.

It's rated M for Mature. It has nothing in it you couldnt see in a hand full of R-rated movies (and some less than R-rated). Merchants wont sell it to you without ID if you appear underage.

But last night when I was standing in line at the local Walmart to get my copy, there stood a 12 year old boy getting his copy. How? His mom was with him and paid for it for him - on a school night. And I bet 10 to 1 that he came down with a tummy ache and stayed home from school today.

So all you people with a child fetish and are afraid that the things I think and do (especially in the privacy of my own home) somehow hurts your children - well you can all shampoo my crotch.
5 comments:

This game must come out now!

I think I'm going to Celina at lunch and pre-ordering a copy to make sure I can get one tomorrow for sure. I would seriously cry if I didnt and then couldnt find one laying around and I dont trust stores selling it at midnight.
6 comments:

I want to take this moment to speak on something that really bugs the hell out of me. And that is UFO's - or rather the people that see them and have to seem apologetic or worried that people will think they are a freak for even remotely thinking the strange thing they are seeing is a UFO.

U.F.O. is an acronym for UNIDENTIFIED FLYING OBJECT. That's it. It doesnt mean that it's a space ship from another planet!

If you look up in the sky and see something flying and cant tell what the hell it is, then guess what? You just saw a UFO. Call it a UFO. Tell all your friends that you just saw a UFO and dont feel the need to tip-toe around the concept or pre-apologize so people dont think you're a loon that might believe in aliens visiting our planet.

I'm not discounting the possibility of aliens visiting our planet or whatever at all. And that gets to the heart of this concept. People should stop worrying about imagining things out to all ends. That's how we figure stuff out and learn. You see something you dont understand so you start constructing and imagining concepts about what it is, etc and then we rule them out and study it until we figure out what it is and why. So having the possibility of it being an alien spacecraft is certainly within the boundaries of things the UFO could be and shouldnt be discounted simply because some people think it's too sci-fi.
9 comments:

And they are back on tour (although now just finding out about it I've missed all the close shows):

The 2008 tour, titled “Live As We’ll Ever Be”, represents a new era in the troupe’s collaboration, and is comprised of completely fresh material which simultaneously reflects who they are now and their patently off-kilter take on ordinary life. Favorite characters from the television series appear in entirely new situations, sharing the stage with new KITH personas which are destined for the same level of cult adoration. In a world where most entertainment tries to play it safe, “The Kids in the Hall” steadfastly refuse to follow the trend, preferring instead to slaughter sacred cows and look at the world – and each other – with refreshing honesty.

Coming to an eardrum near you 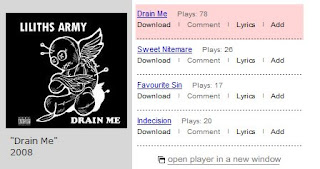 Check out the new music from Liliths Army! Notice the album artwork? Yep that's my drawing they are using. They are coming to the US soon for tour dates, I hope I can go check them out.

So now that's 3 bands using artwork I've done. So go and support the other too as well Erastus and Black Thursday.
No comments:

Just thought I'd drop a quick note about my battle with the flu.

I am still coughing, but not as bad or often anymore. Which is good because my ribs were starting to kill me and I would have a coughing fit to the point where I thought I was going to throw-up.

I'm still a little weak, but I'm trying to be a little more active each day, which in turn helps make me hungry so I can eat a little more each day too. I ended up losing 21 pounds in total from all this, most of my gut and love handles are gone, but I lost a LOT of muscle weight too. And I dropped about 2 inches off my waist. It's been a crazy ride!

I heard the flu shots this year missed one of the flu viruses going around, I guess this one was it. Wowsers.
1 comment:

Labels: health and fitness, My Life 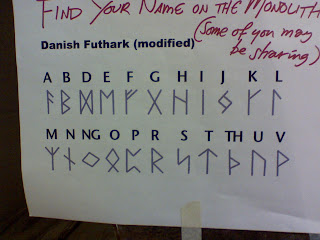 This message was sent using the Picture and Video Messaging service from Verizon Wireless!

To learn how you can snap pictures and capture videos with your wireless phone visit www.verizonwireless.com/picture.

To play video messages sent to email, QuickTime� 6.5 or higher is required. Visit www.apple.com/quicktime/download to download the free player or upgrade your existing QuickTime� Player. Note: During the download process when asked to choose an installation type (Minimum, Recommended or Custom), select Minimum for faster download.

So my fever broke late Wednesday night and I went to rehearsal Thursday night. I only made it as long as it took to practice and line up for the curtain call and the first scene I was in and I had to stop.

I just couldnt push the words out of my mouth any more. I literally got out of breath from trying to talk so loud and I got way over-heated and just generally overdid it. Yeah big surprise out of me I'm sure you're thinking.

So I had to stop part way thru the first scene I was in and I almost collapsed. I gotta tell you I dont quite remember anything from the time I got off stage till the time I reached the hallway and people were scurrying around me. I was drenched in sweat and could barely stand. I sat down for a bit and got out of my costume and they laid me down on a couch. I immediately got the chills/random sweats back and felt like total hell. That night and a most of the next day my fever had returned (not as high but it was back).

Thankfully the nice folks went and got me some chicken noodle soup and something to drink and after resting for about an hour I had the strength to make it back home. Where I just went straight to bed and didnt move forever.

I have missed all the shows, I've now lost over 15 pounds and since shaking a major part of the flu (the upset stomach, and body pains) I have now come down with a horrible cough. I went back to the doctor today and he said the cough is common from what he is seeing with people overcoming this flu and that it could last for a week or more yet. He gave me a script for some antibiotics and some industrial strength cough medicine. So hopefully I can sleep without coughing myself to death.

So as it officially looks right now, my run in Hamlet is over. Not exactly how I wanted it all to turn out, but everyone's been very nice and supportive. If I feel better come this weekend I might try to do a show or two, but I think I've learned my lesson about pushing myself before my body is ready to be pushed. So this week's vacation is going to be spent split between the couch and the bed. I really broke myself this time. I havent been this sick in probably 10 years.

I would encourage you all to still go and see the shows. They have a very capable actor taking over my part and he and everyone else is amazing and well worth going to see. I'm sorry if I let anyone down with all this.

Now back to drinking my Gatorade to try to keep myself hydrated (dont every let yourself get dehydrated if you can help it) and working towards some semblance of an appetite so I can get back some of the weight I've lost and get the rest of my strength back.
2 comments:

I'm not quite dead

Last week between work and working on the production of Hamlet, I put in over 95 hours of time in. The week before was around 85 I think. And over the course of 14 days, I've spent another 12 hours in the car.

Not sleeping or eating has caught up with me, unfortunately, apart from losing 10 pounds over the course of the week I have broke down my immune system and caught the flu.

So I've been in bed sleeping as much as possible and loading up on vitamins and Tamiflu and various other drugs so that I am better for Friday's opening night. My fever's been down over the last day and I'm starting to feel better.
2 comments: