"Now I will tell you the answer to my question. It is this. The Party seeks power entirely for its own sake. We are not interested in the good of others; we are interested solely in power. Not wealth or luxury or long life or happiness: only power, pure power. What pure power means you will understand presently. We are different from all the oligarchies of the past, in that we know what we are doing. All the others, even those who resembled ourselves, were cowards and hypocrites. The German Nazis and the Russian Communists came very close to us in their methods, but they never had the courage to recognize their own motives. They pretended, perhaps they even believed, that they had seized power unwillingly and for a limited time, and that just round the corner there lay a paradise where human beings would be free and equal. We are not like that. We know that no one ever seizes power with the intention of relinquishing it. Power is not a means, it is an end. One does not establish a dictatorship in order to safeguard a revolution; one makes the revolution in order to establish the dictatorship. The object of persecution is persecution. The object of torture is torture. The object of power is power. Now do you begin to understand me?"

Read it again, or for the first time. Even online
No comments:

Every episode of The Simpsons, The Futurama, South Park, Family Guy and American Dad.

http://dailyepisodes.com | All the episodes of different series
No comments:

WASHINGTON (AP) - The Bush administration has blocked release of a report that suggests global warming is contributing to the frequency and strength of hurricanes, the journal Nature reported Tuesday. The possibility that warming conditions may cause storms to become stronger has generated debate among climate and weather experts, particularly in the wake of the Hurricane Katrina disaster.

In the new case, Nature said weather experts at the National Oceanic and Atmospheric Administration - part of the Commerce Department - in February set up a seven-member panel to prepare a consensus report on the views of agency scientists about global warming and hurricanes.

According to Nature, a draft of the statement said that warming may be having an effect. 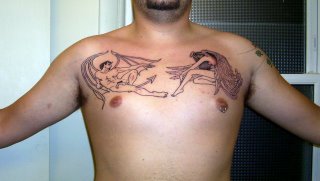 Here is the beginning of my chest piece. It took a bit over two hours to get this all done today. This is simply the outline.

In two more weeks I'll go and get it shaded in and then in two weeks after that I will get the color all added.

This work is absolutely amazing, I cant keep from looking down at it all the time and am so totally amazed that my artwork is now a part of my living flesh. If I get a chance I will post the actual artwork from this. The angel went thru about nine different versions and poses and was quite a process to get the feeling I wanted.

NEW YORK (AP) - In a combative interview on "Fox News Sunday," former President Clinton defended his handling of the threat posed by Osama bin Laden, saying he tried to have bin Laden killed and was attacked for his efforts by the same people who now criticize him for not doing enough.

"That's the difference in me and some, including all of the right-wingers who are attacking me now," Clinton said in the interview. "They ridiculed me for trying. They had eight months to try, they did not try."

On NBC's "Meet the Press," also taped Friday and aired Sunday, Clinton told interviewer Tim Russert that the biggest problem confronting the world today is "the illusion that our differences matter more than our common humanity."

This was an awesome interview and Clinton made it clear he didnt roll over then and he's not going to roll over now. This is passion from thought - passion from true caring. We need more leaders like Clinton.

Tomorrow is the day I finally get started on my chest piece. A tattoo of an angel on the left side and a devil on the right. Sandman (the tattooist) and I are working on pieces of the background, but these are the main pieces. Now I am not a religious person - this is just an expression of good and bad, male and female, left and right, choice A or B.

So tomorrow the outline goes on, then two weeks later I will get it shaded and two weeks after that I will get the final colors put on it. I will post some pics when I get it all done.
No comments:

It's really quite simple

Sometimes international politics can seem confusing and strange. Unpronouncable names and places in far off corners of the world.

Osama bin Laden is hiding in the mountains between Afghanastan and Pakistan. But Bush says if he were to receive good intelligence about his location he would go in after him. The President Musharraf says that he does NOT want the United States in his country running amok and that he would prefer to be allowed to use his forces to route out Osama bin Laden.

Bush said, "we will not distinguish between the people that harbor terrorists and the terrorists themselves."

It's quite simple - something is VERY wrong here.
1 comment:

On Wednesday the last of the F-14 Tomcats still in service were being flown at Oceana Naval Air Station in Virginia as part of the goodbye ceremonies The US Navy began a series of ceremonies on Thursday to celebrate the F-14, as the pilot favourite that served on aircraft carriers for three decades heads into retirement.

The last of the F-14 Tomcats still in service were being flown at Oceana Naval Air Station in Virginia as part of the goodbye ceremonies that would last into Friday, a Navy spokeswoman said.

The fighter jet was made famous by the 1986 film Top Gun starring Tom Cruise, but was more recognized by pilots for its speed, versatility and ability to carry a broad array of weapons.

First flown in 1970 and introduced to the Navy’s fleet in the middle of that decade, F-14s were involved in confrontations with Libya and saw action in Lebanon, the first Gulf War, the Bosnian wars, Afghanistan and the second war with Iraq.

Rolling Stone : Was the 2004 Election Stolen?

God it would be sweet to have a pair of these.
1 comment:

This is a pretty fucked up situation. Take the celebrity out of it, just read the details. It's messed up that the US Government would comply with this.
2 comments:

Superman-How It Should Have Ended

Haha this is great ... I'm Batman!
No comments:

I've just started up a Cafe Press store for my site. Just going to throw stupid stuff up there. Mostly things that I just want, but I thought I would share it too. The only thing I have up there now is the bumper sticker above - and if you know where it's from you are cool.

If you want your Firefox to look like mine, add this code to your userchrome.css file:

/* Remove Stop button when there's nothing to Stop */
#stop-button[disabled="true"] { display: none; }

/* Remove Back button when there's nothing to go Back to */
#back-button[disabled="true"] { display: none; }

/* Remove Forward button when there's nothing to go Forward to */
#forward-button[disabled="true"] { display: none; }

I'm sure if you have a pair of ears you've heard the news that Steve "Crocodile Hunter" Irwin is dead.

I guess the only thing I have say is "Crikey" of course he's dead he jumps in the water with crazy deadly shit. Now if he took a job as a campaign finance budget calculator and died from doing math, I think that would be more shocking.

It is a shame that he has past away - he seemed like a pretty cool guy.

After class in the caffeteria

I am sitting in my college caffeteria right now after class waiting to leave to pickup Brendan at the airport. I should be reading the first six chapters of my typography book, but I decided to post to my blog instead.

My first test is this Thursday on the previously mentioned six chapters and I still have about 150 pages to read for Art History before next Monday.

All this reading really sucks with my eye. They get so fatigued so easily anymore it's not even funny. I didnt get to have the Intacs surgery because my insurance wouldnt cover it. They called it "experimental" so I am in the middle of fighting with them over that and trying to get them to cover it. If they dont end up covering it, I think I will go with the cornea transplant surgery instead. Something has to be done, my contact is not helping that great anymore is a big pain in the ass.

Finally I have class *fart*

Hi everyone. :) Bet ya missed me. I wanted to post the last couple of day but havent had a chance yet. I've completed my first week of college and have been very busy.

Also I just finished working 7 days in a row because Brendan (my personal slave on days) had to take vacation - the wuss.

So I am taking this art class called "Intro to Macintosh" and if you know me you know I HATE Macs. But I thought I would try to throw off my Mac prejudice and embrace the learning experience.

Now granted this is an Intro class and since I have worked with both Macs and PC's for the last 10+ years it's a well below my current level of understanding. So I am trying to focus more on the Art aspect of it. The instructor is really cool and is very free-form in his assignments and projects. He is a very big Mac zealot and his ignorance about PC's and his ignorant smug assumptions that Mac's are superior and do EVERYTHING better is a bit annoying. But he's a nice guy and the class is fun - so I will grin and bare it.