Museum brings creationism to life - Science - MSNBC.com: "PETERSBURG, Ky. - Like most natural history museums, this one has exhibits showing dinosaurs roaming the earth. Except here, the giant reptiles share the forest with Adam and Eve.

That, of course, is contradicted by science, but that’s the point of the $25 million Creation Museum rising fast in rural Kentucky.

Its inspiration is the Bible — the literal interpretation that contends God created the heavens and the earth and everything in them just a few thousand years ago."
No comments:

Anyone wanna buy my car? C'mon you know you do. Super cheap!

Check it out!
No comments:

Cruz, 21, told the NBC 10 Investigators that police arrested him last Wednesday for taking a picture of police activity with his cell phone.

Police at the 35th district said they were in Cruz's neighborhood that night arresting a drug dealer.

Cruz said that when he heard a commotion, he walked out of his back door with his cell phone to see what was happening. He said that when he saw the street lined with police cars, he decided to take a picture of the scene.

'I opened (the phone) and took a shot,' Cruz said.

Moments later, Cruz said he got the shock of his life when an officer came to his back yard gate.

'He opened the gate and took me by my right hand,' Cruz said.

Cruz said the officer threw him onto a police car, cuffed him and took him to jail.

A neighbor said she witnessed the incident and could not believe what she saw.

'He opened up the gate and Neffy was coming down and he went up to Neffy, pulled him down, had Neffy on the car and was telling him, 'You should have just went in the house and minded your own business instead of trying to take pictures off your picture phone,'' said Gerrell Martin.

Cruz said police told him that he broke a new law that prohibits people from taking pictures of police with cell phones.

'They threatened to charge me with conspiracy, impeding an investigation, obstruction of a investigation. … They said, 'You were impeding this investigation.' (I asked,) 'By doing what?' (The officer said,) 'By taking a picture of the police officers with a camera phone,'' Cruz said.

Word of the Day

Wetzel's, tommorrow, will be very BACCHANALIAN!
No comments:

ROFL! God this show is so great. It's also sad that this is a real person and not fiction.
No comments:

So I need to get a title of my new car and to do that in Ohio I need to present a Driver's License and my Social Security card. I have to do this because there is a law in Ohio now that you are not able to get your Social Security number printed on your license anymore. The state government is trying to protect the lowest common denominator in society from identity theft.

So what fucking sense does ANY of that make? So the only thing this law or statute or whatever is doing right now it's making you obey the card's warning about not laminating it and NOTHING more. I wonder if I got a tattoo of my social security number and had a notary tattoo a signature on it I could use that.
No comments:

"This bill would support the taking of innocent human life in the hope of finding medical benefits for others," Bush said. "It crosses a moral boundary that our decent society needs to respect."

I guess killing in the name of war isnt crossing that line. Killing to destroy is okay, but killing to heal and save lives is bad.

Which is deadlier? Why is killing to stop one right and killing to stop another wrong? The President is simply pandering to the far right wing agenda because they voted him into office and give him money. So their tax dollars dont get spent on killing embrionic cells (which will be thrown out anyway if not used) and I have to put up with my tax dollars being used to build bombs and planes to kill people I dont think deserve to die by our hands.

This is why I vote. At least for a few minutes of one day every couple of years, my dillusion about having a voice in this chaos is complete and very comforting.
1 comment:

A narrated tour of a FEMA camp shows where rails run in (allowing trains full of detainees to be brought to the facilitiy), buildings with all windows and doors blocked, and large furnaces. In addition to the FEMA camps that presently exist, Halliburton has a contract to build more on demand, in event of 'emergencies'. "

Welcome to Your NEW America, some of us might be seeing the country from the other side of places like this that are being built right in our own back yards. I feel sick.

Well unless this is some FEMA contigency for a massive Zombie outbreak, then I am totally fine and welcome the Zombie onslaught.
No comments:

The wrong kind of people

The Cincinnati Post - The wrong kind of people: "Dick Roeding, a Lakeside Park Republican who has been in the Kentucky Senate since 1991.

This week, Roeding mixed himself up in the University of Louisville's decision to offer health benefits to domestic partners, and in so doing the senator came across as a bigot unfit for further public service.

'I find this very repulsive,'' Roeding said of U of L's plans, according to the Louisville Courier-Journal. And he continued: 'I don't want to entice any of those people into our state. Those are the wrong kind of people.''

Let's hear it again: The wrong kind of people.

In case you're thinking Roeding was misquoted, or that those statements don't reflect his genuine sentiments, consider what he said when a Kentucky Post reporter called to get his reaction to criticism of his remarks from the Republican Log Cabin organization. 'Who are they?'' Reading asked our reporter. Told they were a gay rights organization within the GOP, Roeding said, 'Oh, a bunch of queers.''"


What a fuck. Thanks Kentucky. You and Alaska, sure can pick 'em. Then again we suck at it here in Ohio too.
No comments:

Holy shit, look at this guy. Recognize him? It's Macho Man Randy Savage! Yes. This is a fairly recent picture too. He has gone to total shit - or this was taken right after he woke up sleeping underneath a muffler in the middle of leper colony.
No comments:

"'I talked about my desire to promote institutional change in parts of the world like Iraq where there's a free press and free religion,' Bush said at the news conference, 'and I told him that a lot of people in our country would hope that Russia would do the same thing.'

Putin, in a barbed reply, said: 'We certainly would not want to have the same kind of democracy as they have in Iraq, I will tell you quite honestly.' Bush's face reddened as he tried to laugh off the remark. 'Just wait,' Bush replied about Iraq.

Putin also said Russia would not take part 'in any crusades, in any holy alliances' - a remark seemingly intended to win points with Arab allies. Bush's national security adviser, Stephen Hadley, said he was perplexed by the comment."


Haha, Putin has a set of balls on him. Good for him to step up and speak what is really on his mind. And Bush's "Just wait" comment is so childish - but what else could you expect from a guy who's been at this G8 conference for 2 days total and spent half of one of those days mountain biking? Fiddle on "W", fiddle on.
No comments:

Here's the pic of my newest tattoo. This is the one I got for my Mom. It's a clover, since I was born on Saint Patrick's Day, it's a four leaf one for luck and the Mom banner (and the whole thing) for my Mom. :)

I also got my nipple pierced on the same side on the same day and WOW is that a lot. It didnt hurt real bad or anything, just achey and a lot to get used (laying and not bumping the stuff, etc). 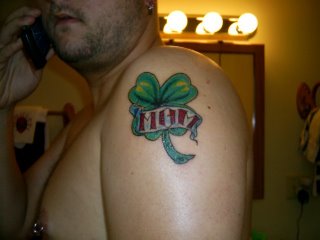 Here's the finished and fully healed tattoo on my back. I got it to mark the passing of my father and the enormous amount of changes in my life the last year or so. I think it turned out fantastic. 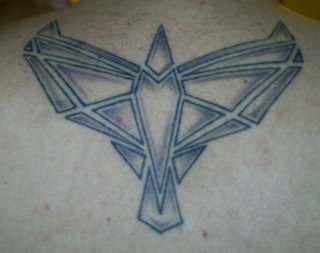 Further On Up the Road

Listening to some Johnny Cash right now, so good. I've been just repeating his album "American V" and it's just amazing. If you havent checked it out, then poke one eye out with a spork and use the other one to navigate to the nearest place to download or purchase it.

Been pretty busy lately and havent had time to post. Still trying to figure out the house purchase and get that sorted so I dont end up getty screwed with no equity.

Oh and I got a new tattoo. I will put a picture up later. Got a new piercing too - might put a pick of that up, but it's really just your normal nipple piercing.

My second tattoo was for my mom and is a four leaf clover (her idea because I was born on St. Patrick's Day) with a banner and the word MOM in a pretty american classic style.

I will talk more about all of that when I get a picture of it and post that. Maybe I will take a picture with my new phone. WOOT! I tried a Q, but man Verizon had it locked way down and it sucked, so I went to the very luscious and hackable V3m(M).

One sunny morning, we'll rise - I know. And I will meet you further on up the road.
No comments:

EFF: Frequently Awkward Questions for the Entertainment Industry
No comments:

Who the Fuck is Ted Stevens?

Wow Alaska, thanks for unleashing this gem on the rest of us.

This guy is my new hero

This is amazing! Mawd, make sure you watch this!

Contest opens July 4th 2006. Complete guidelines will be posted on www.agfrag.com and www.bobross.com in June.